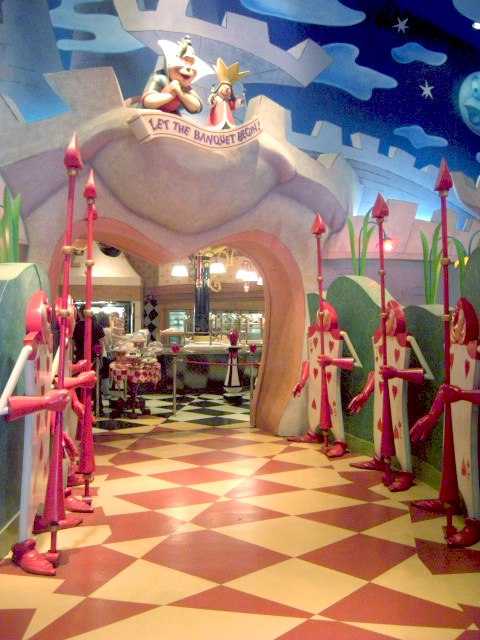 A gorgeous slice of Lewis Carroll’s imaginary world in Japan

In the famously touristy Ginza shopping district of Tokyo, Japan is a restaurant that should be a tourist attraction in its own right.  It’s an Alice in Wonderland-themed eatery that is truly spectacular to behold.  The designers cut no corners when it comes to the atmosphere of this place and if you manage to get the chance to eat there, you should by all means take it.

The decorations that dress up the establishment are both classy and genuine.  The first thing you’re greeted by is a line of flanking heart soldiers.  Once you enter the building, you’re in a whole other world.  Murals are plastered across the walls, depicting Lewis Carroll’s fantastic novel in the way that it was visualized in the original Disney cartoon adaptation.

Multiple rooms display multiple themes. There are giant stacks of books, hallways with walls made to look like the pages of Alice and Wonderland, hedge-row tables, playing card tables, giant teacup tables and freestanding windows and doors that lead to nowhere.  Everywhere you look, there’s something to see. 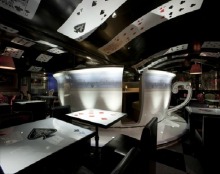 To add to the atmosphere, the waitresses are dressed up to look like Alice.  The food gets its own treatment, starting with the strange menus that are made in the likeness of an Alice and Wonderland diorama.  Once you’re served, expect pizzas shaped like playing cards, dishes crafted to look like chessboards and every plate of food given an artistic make-over.

The biggest drawback to visiting the Alice in Wonderland restaurant is that given its place within the Ginza district, it isn’t cheap. Still, if you have a few extra bucks to spend, it’s worth at least one meal at this amazingly theatrical establishment.