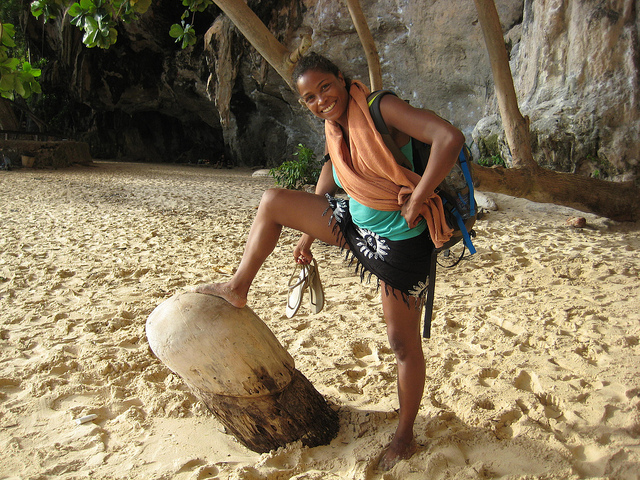 On my first trip to Railay Beach in Southern Thailand, I was introduced to the “Penis Temple,” in Pranang Cave. The cave itself is a semi-circle of massive limestone peaks, arching over a beautiful sandy beach. The water coming into the cave from the Andaman Sea is pristine blue, and even when it rains, the peaks cover the beach for those still wanting to be in the sand. With all the beauty previously stated, the Penis Temple was just icing on top of the cake.

Local legend has it that the phallic wood and rock carvings in the temple actually pre-date Buddhism in the country. The temple was created as a place to worship and pay tribute to indigenous gods, for those looking to have help with fertility. Now, the male anatomy-shaped stones and wood are covered in candles, incense and small denominations from both locals and travelers alike trying to conceive.

Though the actual temple is secluded to only Pranang Cave, the observant eye can see that there are Phalluses all along the walk from Railay Beach, and scattered around Tonsai Bay as well. Naturally, while traveling, this should become a game.

The rules are simple. The person who finds the least phalluses while walking from beach to beach or to Tonsai Bay, must buy the other players the first round at bar in the evening.  Though it will probably differ from culture to culture, other rules will include winner of most artistic/grotesque/creative picture with phallic wood or stone also receives a cocktail from the other players, and player with the most creative phallic find drinks for free all night.

Enjoy penis hunting while on your beach getaway!


The Muscat Festival of Oman