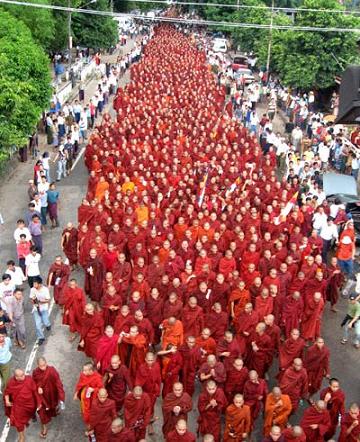 Buddhism at a young age

One of the most interesting aspects of a visit to Southeast Asia is encountering true Buddhism. This can come in the form of riding public transportation with monks, waking up early to see the daily offering, or visiting one of the many temples and monasteries found in the different countries. The practices, temples, devotes, and all aspects of the religion change from country to country, giving curious minds a great introduction to the religion.

With poverty being rampant throughout rural areas in Southeast Asia, Buddhism offers a way of life two many families unable to afford schooling for all their children. Staring at a young age, children will begin to live at the monastery, similar to moving to a boarding school. Though they have no say in the matter, the children will be raised as monks, living, worshipping and adhering to the teachings of the Buddha.

Though spirituality can be a beautiful thing, one issue that pops up around Myanmar is non-devout monks. This can be a child who was placed in the monastery at a young age, who now live as they please, yet still take advantage of perks of being a monk. It also can be as simple as someone wearing monk robes and terrorizing tourists. Regardless, fake monks, or non-devout monks, are an issue for tourists visiting Myanmar.

Fake monks can be recognized through an array of strange habits. Some will ask for donations directly, while others can be seen pestering tourists at bus and train stations at odd hours in the night. Many also can be seen smoking or drinking, which are both forbidden by the religion.

There are true monks in Myanmar, so don’t be afraid to seek wisdom while visiting. Stay safe on your travels, though, and do your best to avoid those taking advantage of the religion.