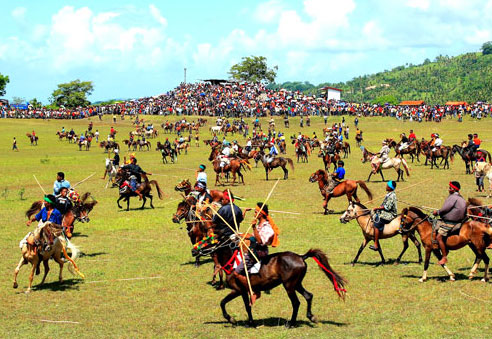 Sumba, a small island of Indonesia, is home to one of the more unique sporting festivals of the world.  The Pasola War Festival takes place in February and March each year, traveling across the island to celebrate the coming of the harvest in many villages.  Pasola, roughly translated, means spear game.  And the event does, indeed revolve around a game that involves spears, as well as throwing them at people while on horseback.

The origins of this festival are unknown for the most part, with many legendary tales to explain its beginnings.  Others believe it evolved from some sort of peaceful dispute resolution.  Either way, it has now become integral to the celebration of harvest time on the island.  Its popularity has grown such that it brings in huge crowds from not only the local islands, but from all over the world.

As is to be expected, even blunt spears can cause damage.  Injury is a given when it comes to the Pasola War Festival.  Most just sustain bruises or get knocked from their horses, but there have been cases of people losing an eye or even dying in pursuit of this tradition.  The spilling of blood is not considered a bad thing, however.  The blood lost during this tournament is believed to fertilize the Earth and lead to a fruitful harvest in the future.

If you’re not blood shy and have a taste for unique sports, then the Pasola War Festival might be right up your alley.  You can witness great feats of traditional combat and horsemanship, all while enjoying a festive atmosphere with the locals and people from all around the world.  There are few events like this amazing Indonesian celebration of the harvest.